a glimpse into our son’s nursery + decor 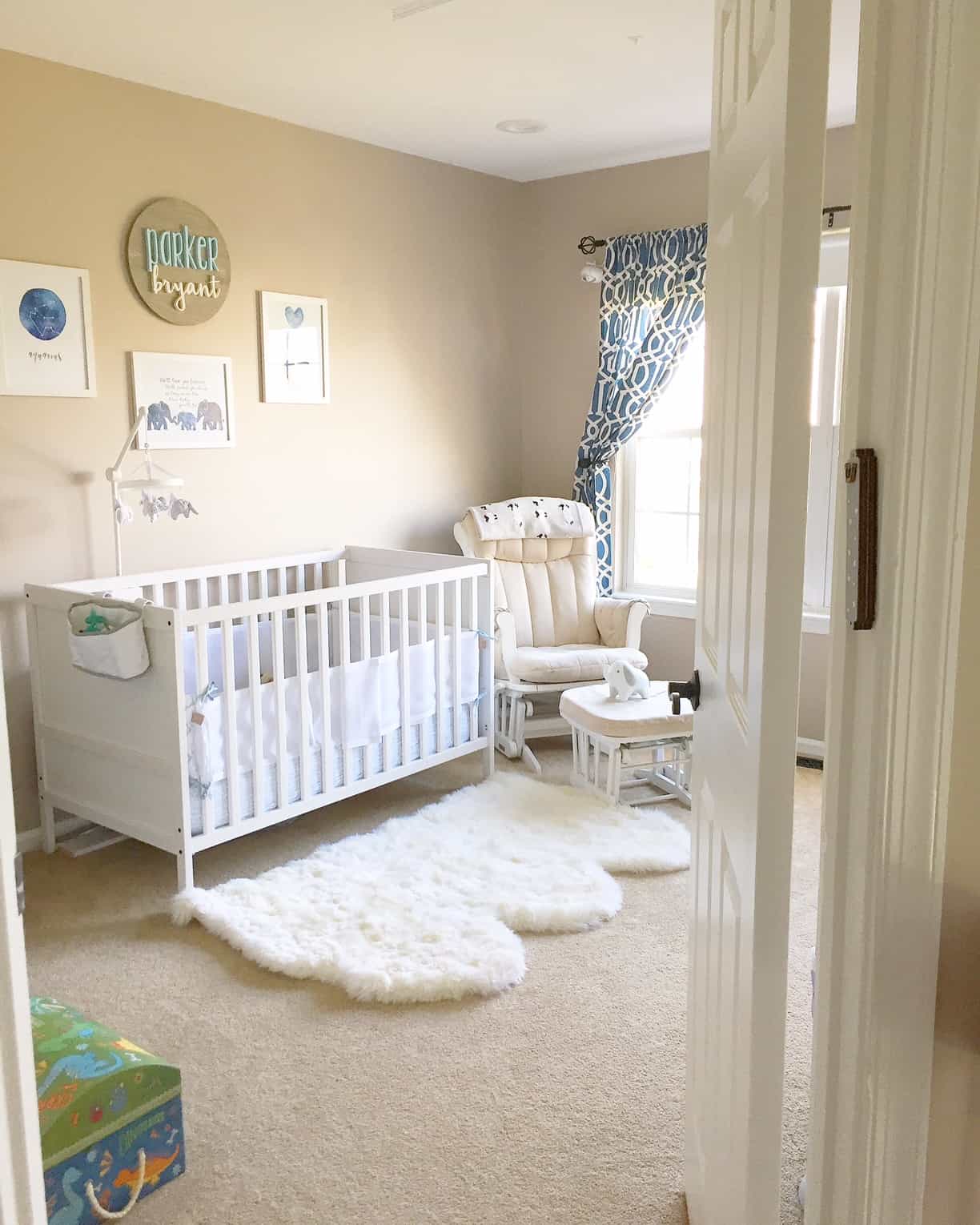 I LOVE decorating. HGTV is one of my obsessions. The only book that I have completed post-pregnancy is The Magnolia Story by Chip + Joanna Gaines. So when I found out we had to move when our son was 10 weeks old, while I was panicked, I was excited to decorate again! His nursery was complete in our old house, but I added a few new touches in our new home.
Quick back story. Jordana + I were living in NYC and moved to the burbs in December 2014. We moved into a rental townhouse as we wanted to make sure we liked the area + didn’t miss NYC + I had made some poor financial decisions in my business, so money was tight at the time. We ended up LOVING where we lived and knew this is where we wanted to stay. When we got pregnant, we decided that we would stay in the rental and then purchase our forever home before baby #2 was born. This would give us extra time to save and then only require us to move once with a kid. Well … you plan, God laughs.
In April of this year, our landlord emailed us to tell us that she was moving back and we had about 60 days to leave. <insert complete panic + shock> I had a 10 week old … what?!?!
Jordana is a HUGE believe in the Universe (I am too but I still get scared) and knew that it would work out. We thought to ourselves, hmmmm … maybe we should buy a house … ? I mean, our mortgage would be less than our rent (how crazy is that?!). So we contacted a realtor (I happened to know her growing up and we just reconnected – divine timing) and booked a few appts. The day after we got the email, we looked at 3 homes … hated them. We wanted to stay in the development where we were living because it has such amazing vibes, was quiet, calming, had lots of young families, was in an amazing school district + we made friends. Only ONE house was on the market there and it was one we really didn’t like. I was feeling so bummed and couldn’t believe we would find anything.
Fortunately, it was in the spring during a time where a lot of people put their homes on the market, and our realtor got wind that a home in our development was going to be listed that following weekend. On Thursday (only 4 days after we got this email), the home went up, we saw it 30 minutes later and as we walked in the door (literally), we knew we wanted it. Jordana + I are the type of people who instantly know when something will work. We get a feeling + this home just felt amazing. It also was super updated and absolutely gorgeous – completely move-in ready. We put in an offer that night and after a bit of negotiating, we were under contract!!!! Even though we had a baby, this felt like SUCH an adult thing to do – I mean, woah, we were buying a house!
Back to moving + decorating … I absolutely loved the vibe + feel of Parker’s old room. I’m the decorator of the family, so I picked everything out and then J says yes or no to things. We decided that we wanted a light, airy, cozy theme. We wanted the space to be welcoming, calm + peaceful. I wanted it to be bright with a lot of white with blue + gray accents. I knew I wanted white furniture + my cousin gave us the gorgeous rocker / glider that she used for her kids (so cozy!). I also knew I wanted a white fluffy (faux) sheepskin rug because it reminds me of a cloud!
We picked elephants as his theme because we love what they stand for and represents — elephant moms develop strong, intimate bonds with their family + it is said that they have a closer relationship than any other animal on Earth. A mother never leaves her young + we want our son to feel that connection, love + bond.
So I started my Etsy search when I was pregnant and found this gorgeous photo of a
family of 3 elephants holding onto each other that says, "We’ll love you forever, We’ll protect you always, as long as we live, Our baby you’ll be". :: cue tears :: This was the first print that I bought + so the blue-indigo watercolor set the blue theme for the rest of the prints as you can see (zodiac print purchased from this shop [after he was born since his due date was Capricorn] + hearts purchased here). The last addition to his crib wall was the wooden sign – obsesssssssed. I ordered this after he was born because we hadn’t announced his name (ordered here from the nicest shop owner!) + my wife was superstitious and wanted to make sure that we officially named him before ordering anything (I did order one little print with his name, though, hehe). 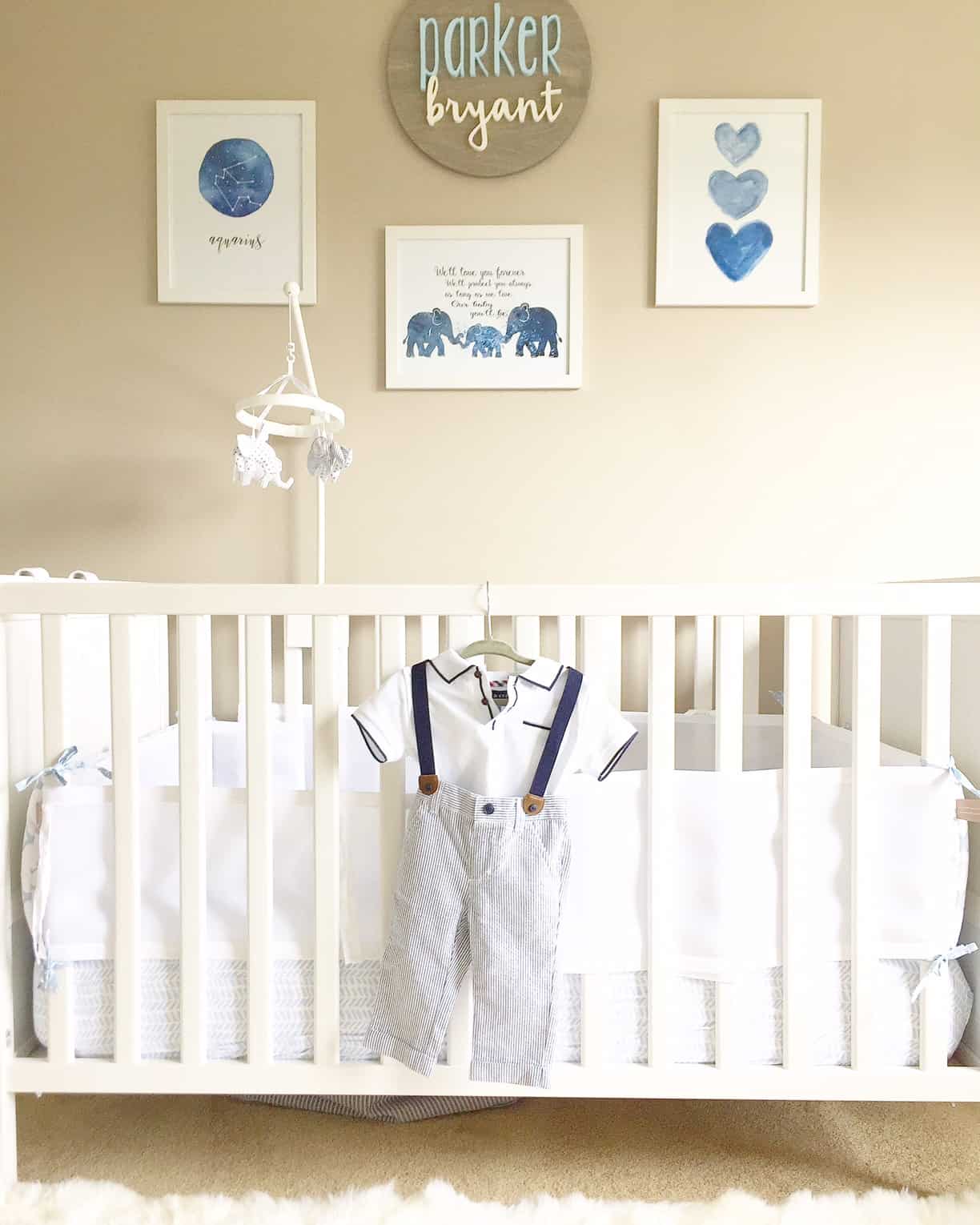 Mesh bumpers make the pic not as pretty, but our son likes to kick his legs through the slats! And can we talk about this outfit???? We’re doing a beach family photoshoot where we’re all going to wear blue + white and this is Parker’s outfit 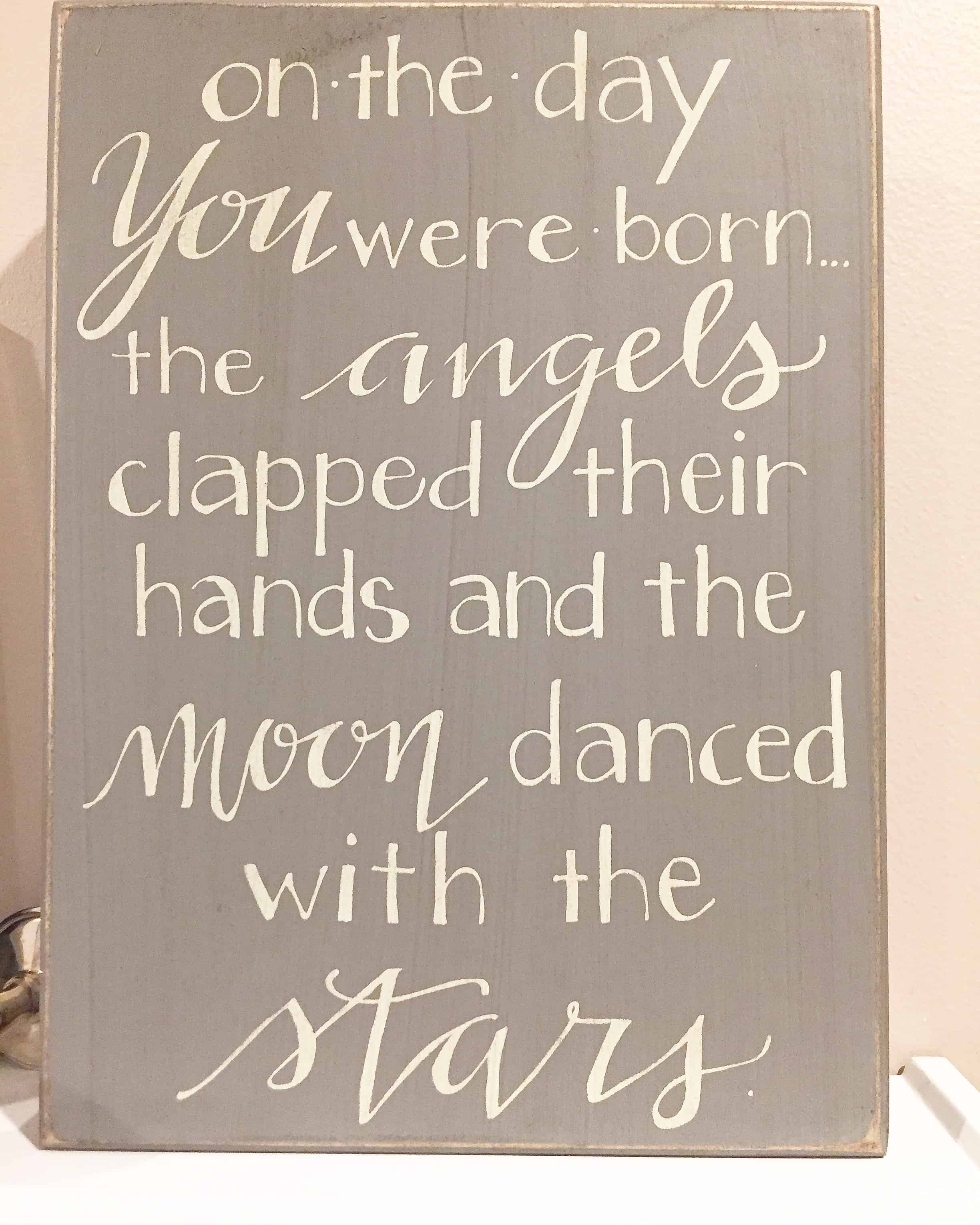 Next up, the wall with his dresser + bookshelf. When
we were on our babymoon, we found this beautiful gray
wooden sign that says, "on the day you were born, the angels clapped their hands and the moon danced with the stars", so that obvi had to go up somewhere along with one of my favorite lyrics from Hamilton – "I’ll do whatever it takes, I’ll make a million mistakes, I’ll make the world safe and sound for you". We decided on white floating shelves on that wall and we have a little elephant print with an ombre blue buddha (we swear he was a Buddhist in a past life because whenever he sees our big Buddha canvas in our bedroom, he gets the biggest smile on his face!). Utilizing different heights for the shelves added some character to the space allowing your eyes to float to each different part of the wall. 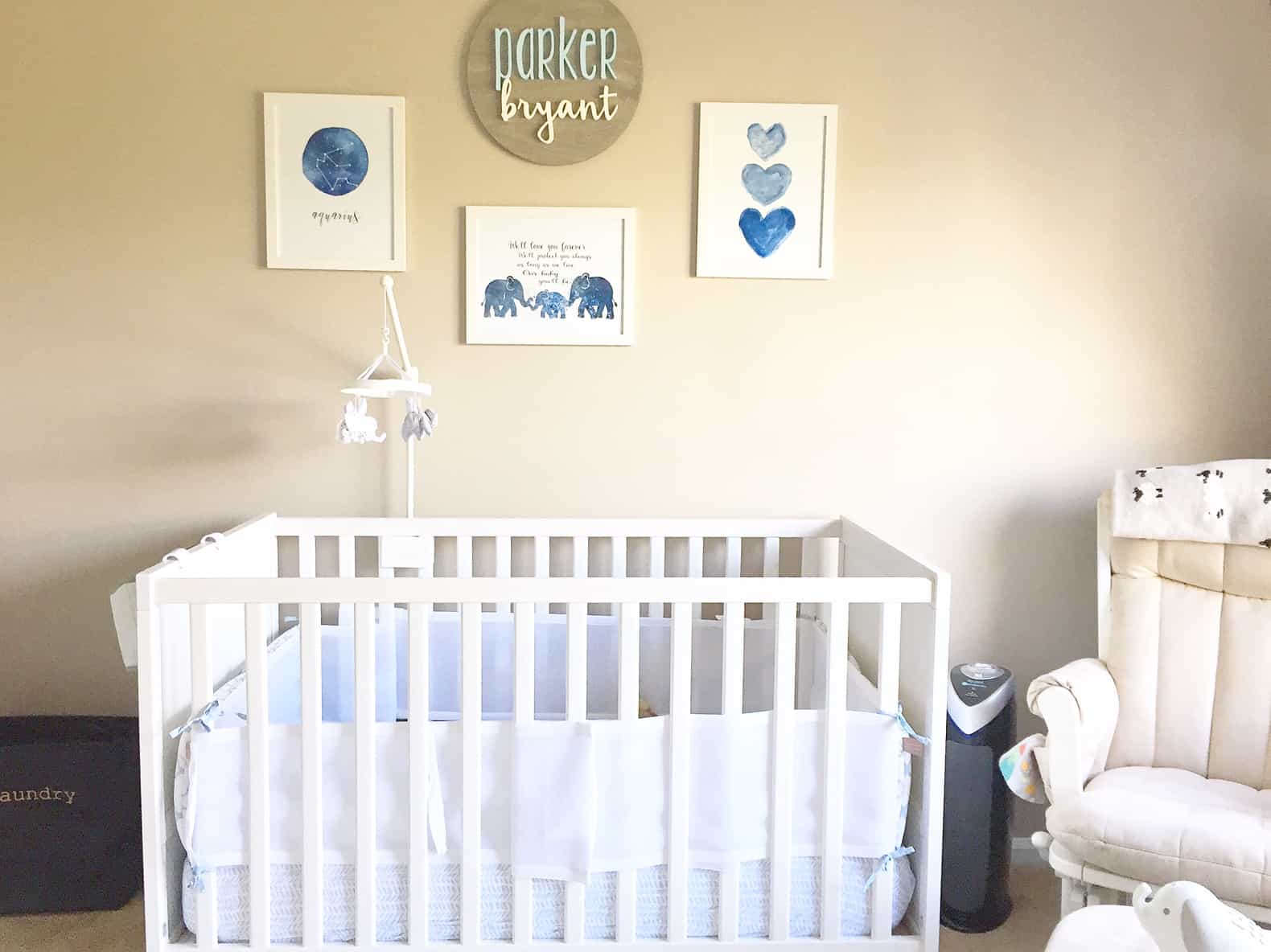 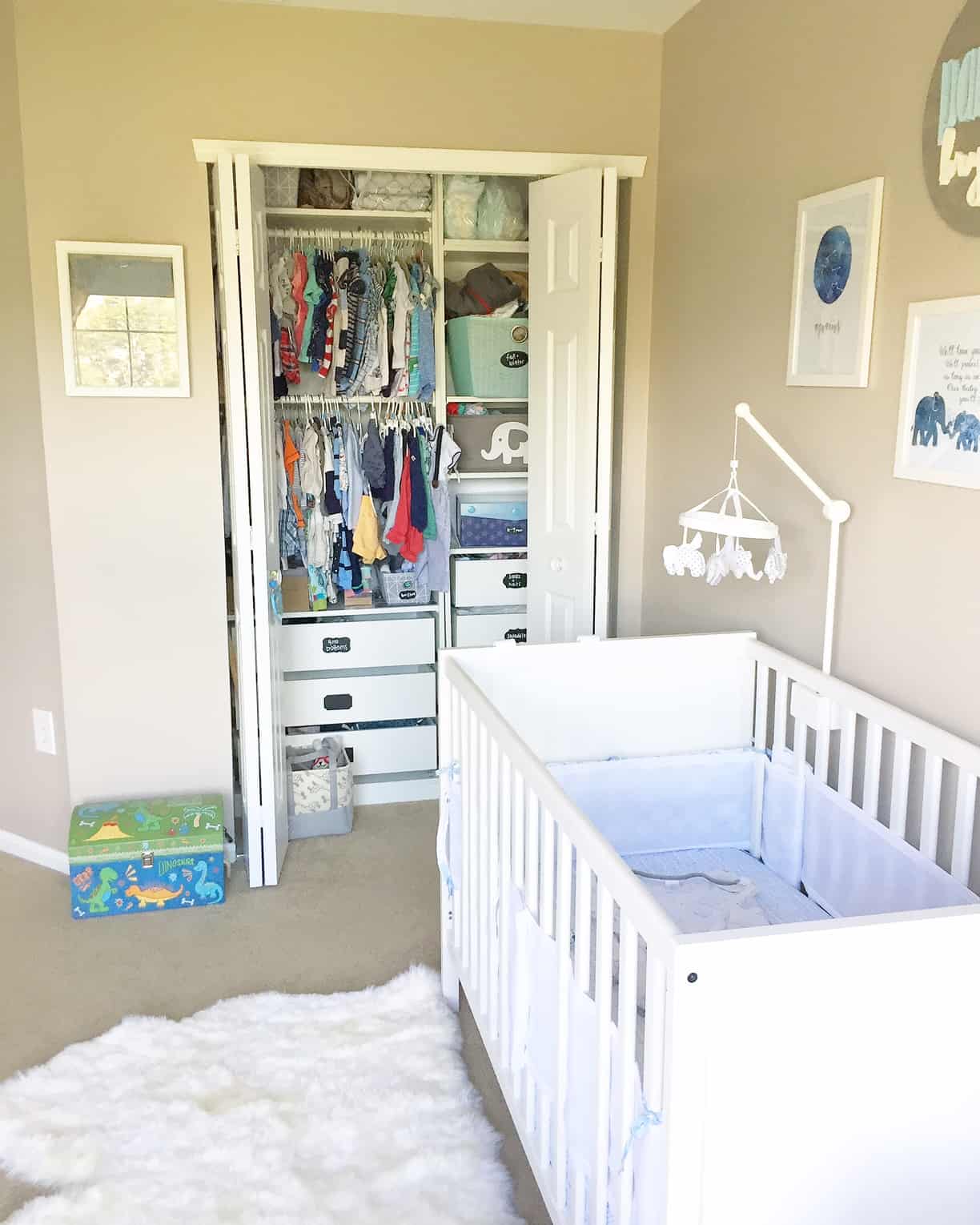 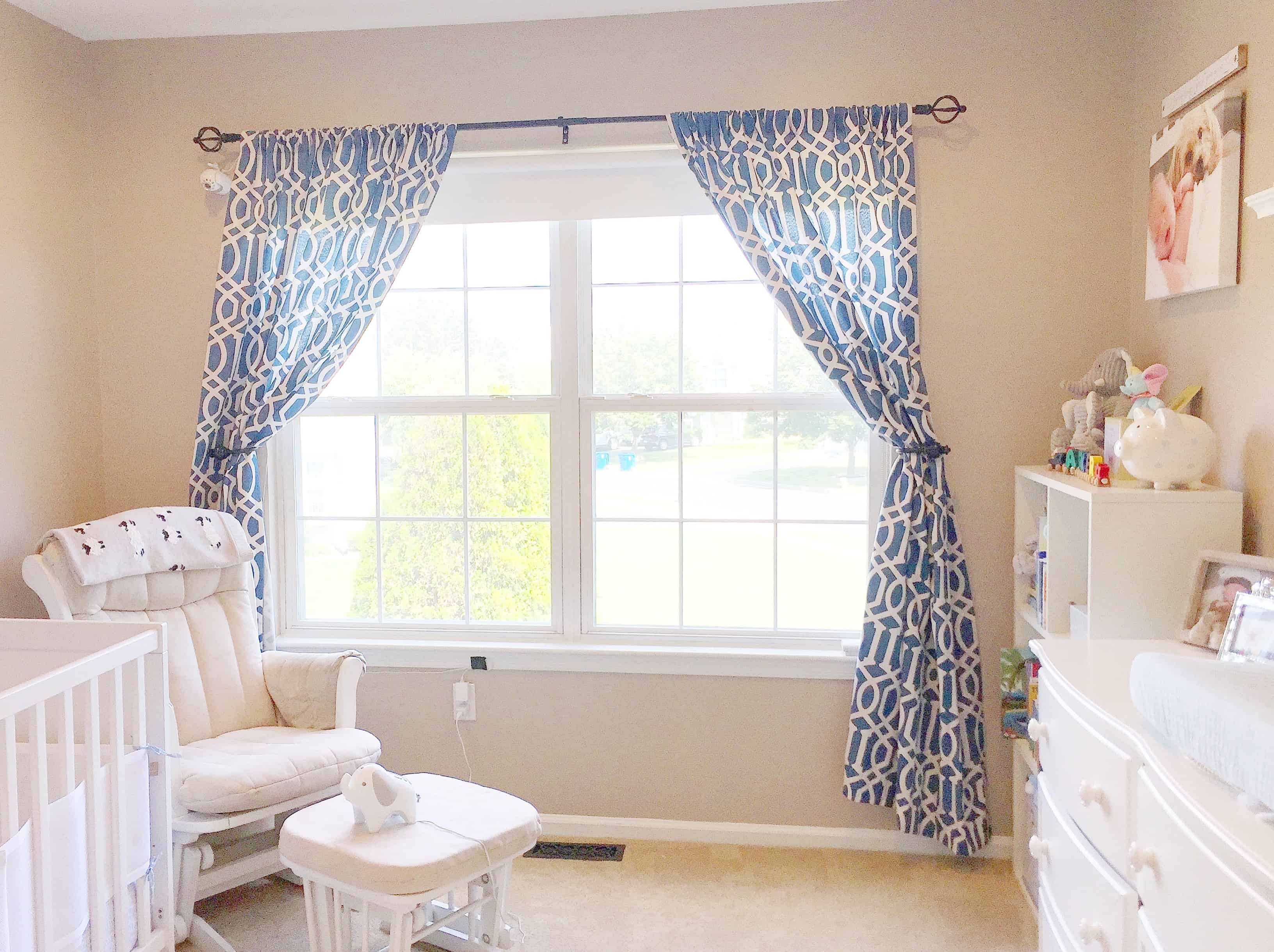 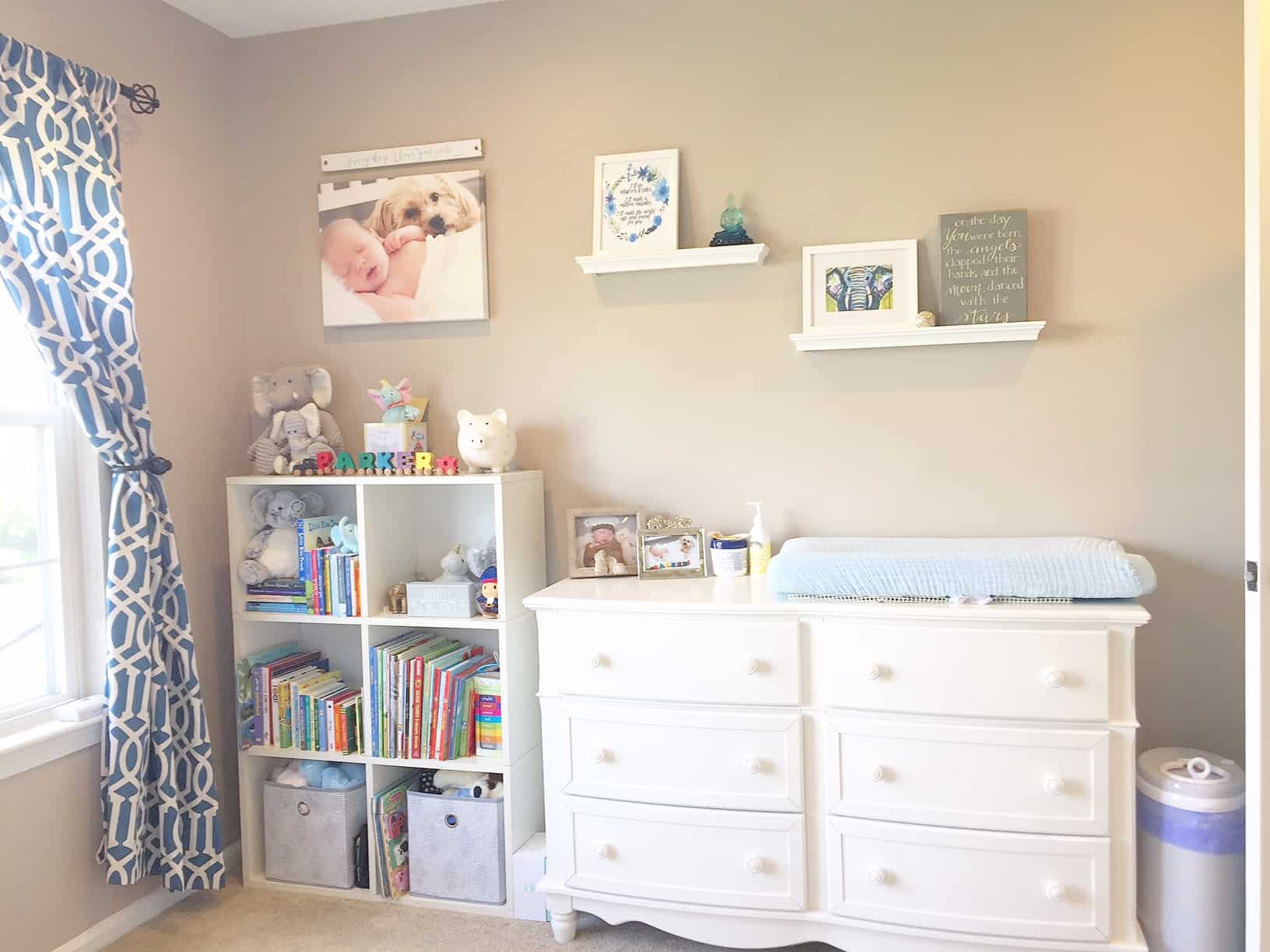 My wife actually picked out his curtains (her big contribution to the space from my favorite store – Target) and I LOVE them. They add such a cool design feature to his space while not being distracting. The previous owners of our home had installed a cool closet system in his room, so we got some reusable labels to label the drawers – it really gives us so much more storage space. On the other side of the room, above his bookcase, we chose a stunningly sweet picture of Parker + Ruby taken during his newborn photoshoot. We couldn’t believe that when the photographer placed Parker onto the rug that Ruby just came right over and curled up on him! :: cue heart melt:: And then, we found this sweet wooden sign at a local baby boutique that says, "Every day, I love you more" and I had to have it! 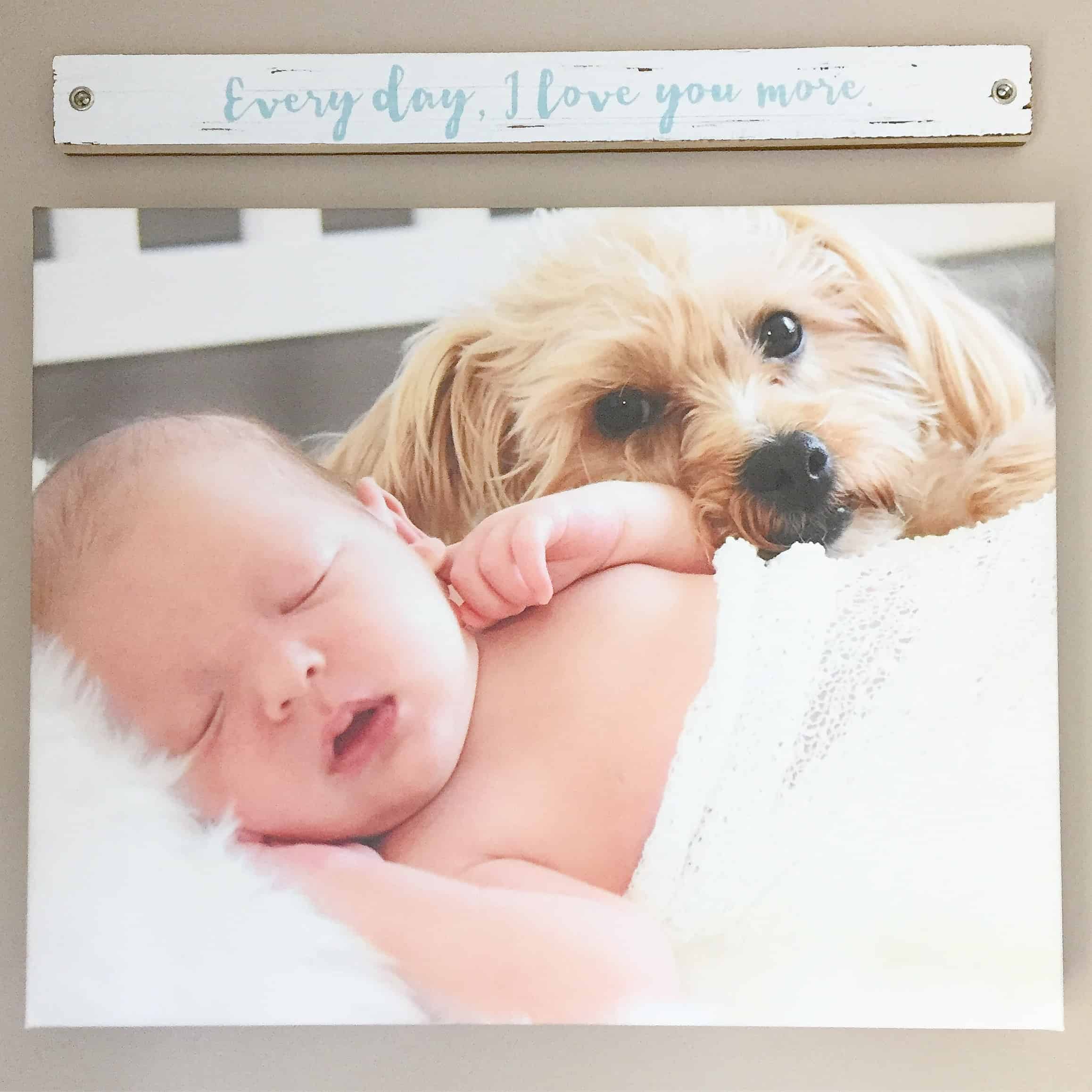 At our baby shower, we received beautiful picture frames, so on his dresser, we added a few photos from his newborn shoot. And lest we forget the Bryant Park onesie my wife bought me for our 2nd anniversary (cotton anniversary) that we framed (if you didn’t know, Parker Bryant, our son, is named after Bryant Park because it’s part of the story of how Jordana + I met – for the full story, click HERE). 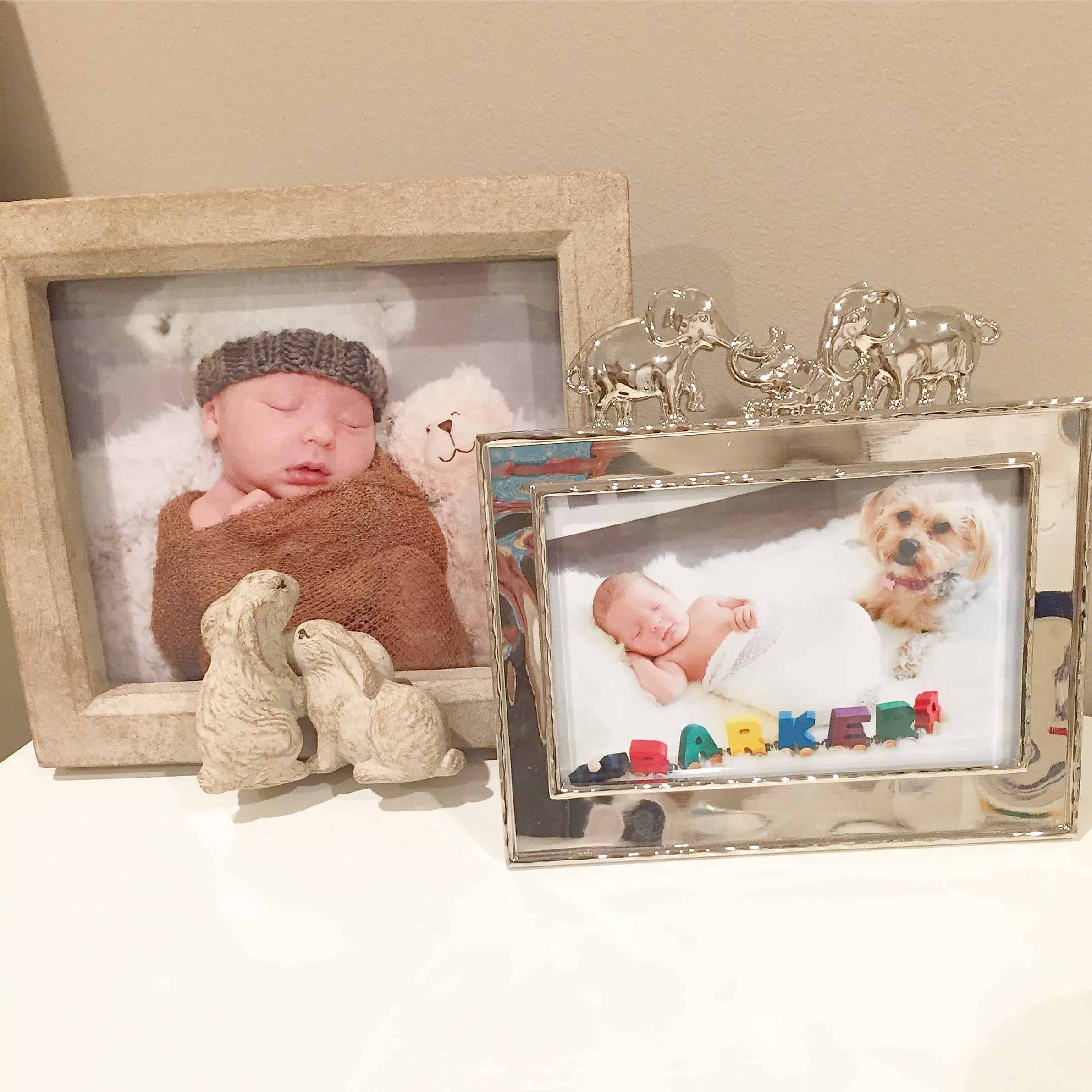 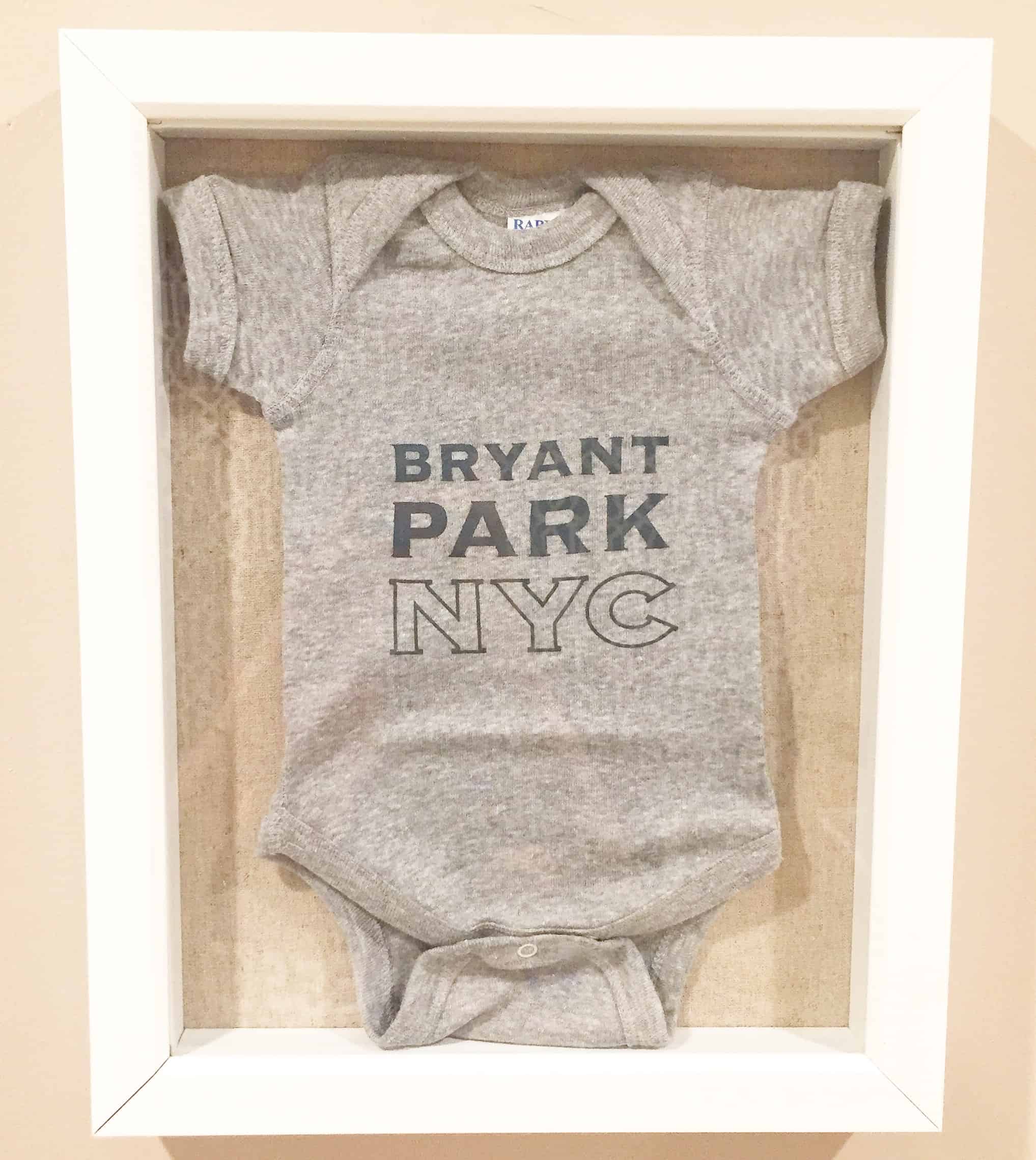 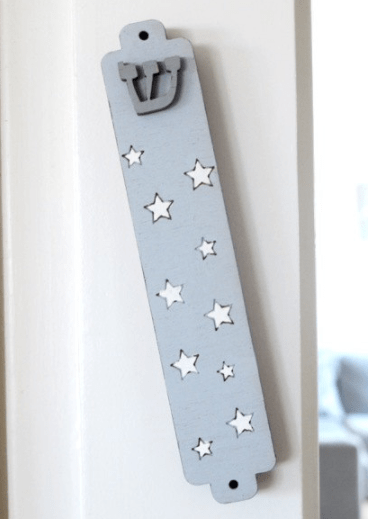 The final touch is our mezuzah in his doorframe. I found this beautiful star mezuzah
on Etsy from this shop in Israel.
These little touches just make me so happy as they are so personal and unique. A lot of these items won’t grow with him, but we will cherish them forever and repurpose them in other places in our home.