I was inspired to write + share my story after my friend Maegan shared hers on her blog, Hugs Love & Heels. We’ve all heard of postpartum depression, but I had never heard of postpartum anxiety. I was well aware after having Parker that PPD was a potential issue – especially since I’ve had mild depression most of my life. And I knew that I would worry about him – what I didn’t expect was paralyzing worry + fear. 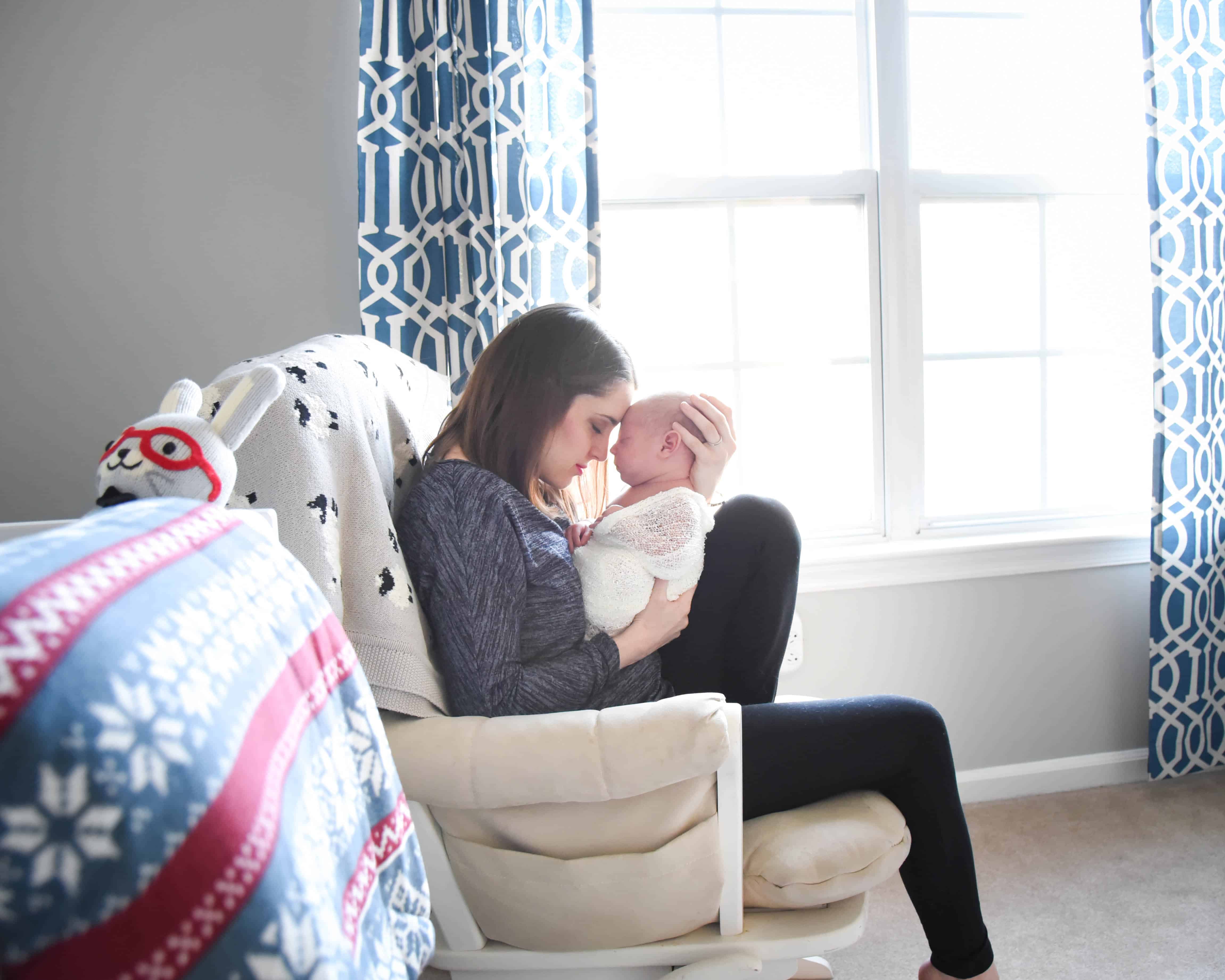 I had a super complicated delivery and was in pretty bad shape after Parker was born, so it was a rough start to begin with. I felt guilty and blamed myself since I was induced even though I couldn’t have prevented his shoulder getting stuck (called dystocia). But in the moments after he was born, I felt numb + emotionless. It was awful. I thought this was going to be the happiest moment of my life … instead, I had to lay there while a NICU team rushed in with my son across the room (I didn’t get to hold Parker for almost an hour), my OB had to rip my placenta out because it got stuck and then stitch me up while I was reliving what just happened as I cried. It was certainly not a great start, and for months, it haunted me. I felt robbed of this experience that I dreamed about. All I wanted and requested of my doctors was that Parker be immediately placed on me … and that didn’t happen. It still tugs at my heart and makes me sad. Fortunately, when Parker was placed on me, he latched immediately and we’ve been inseparable (and still breastfeeding) ever since.
Because of my delivery, I’ll have to have c-sections moving forward. So learning this right away made me even more upset and already feeling robbed of future births … it was just a lot at one time! While I still haven’t fully come to terms with this, I’m a lot better since I’ll have time to prepare for this type of delivery as well as not being able to hold our next baby immediately ahead of time (though I am looking into gentle c-sections where they will place the baby on you right away … but we’re not there yet!).
My hospital stay was a bit of a blur. I was exhausted and in pain. I also had several visitors so I felt guilty sleeping (note to self – no one is coming the first day next time!) and the nurses came in like every hour, so how are you even supposed to sleep?
And the hormones. Oh, the hormones. I would laugh and cry within the same five seconds … every hour. For no reason. For weeks. While I was so in love and so happy, I was still traumatized by the delivery and also worried constantly about every single thing. Is he breathing? Why isn’t he sleeping? Why is he sleeping so long? What if he gets sick? What if he bangs his head? The list went on and on and on. And as he’s gotten more mobile and has hit his head … I’ve suffered from severe panic. I’m getting a lot better now that I’ve upped my medication and have talked to people about it – ladies, get yourself some mom friends STAT – they’ll save your life + sanity.
It wasn’t for months after Parker was born that I realized that my level of anxiousness wasn’t “normal” (I dislike that word but it’s the easiest to describe the situation right now). Sure every new parent is worried about their child – and I’ve heard the worry never ends – but I was obsessive and it was debilitating at points. My wife encouraged me to reach out to my therapist and since then (and praise the Zoloft gods) things have gotten better. I’m talking about it. Acknowledging it. Sharing it. And when we release things and give them a name and put them out into the world, our burden seems lighter. You realize that you’re not alone. That you absolutely are “normal”.
Now I still want to keep Parker in a bubble and never let him out of my sight (he can just live next door when he grows up, right?), but I’m learning to let him learn things on his own and foster some independence. And yup, he’s gotten bumps and bruises, but I’ve learned that I need to show him that it’s okay and not have a reaction so he doesn’t get scared. We’re both learning and growing together and it’s making us both stronger people. How amazing that my son is such an incredible teacher already? 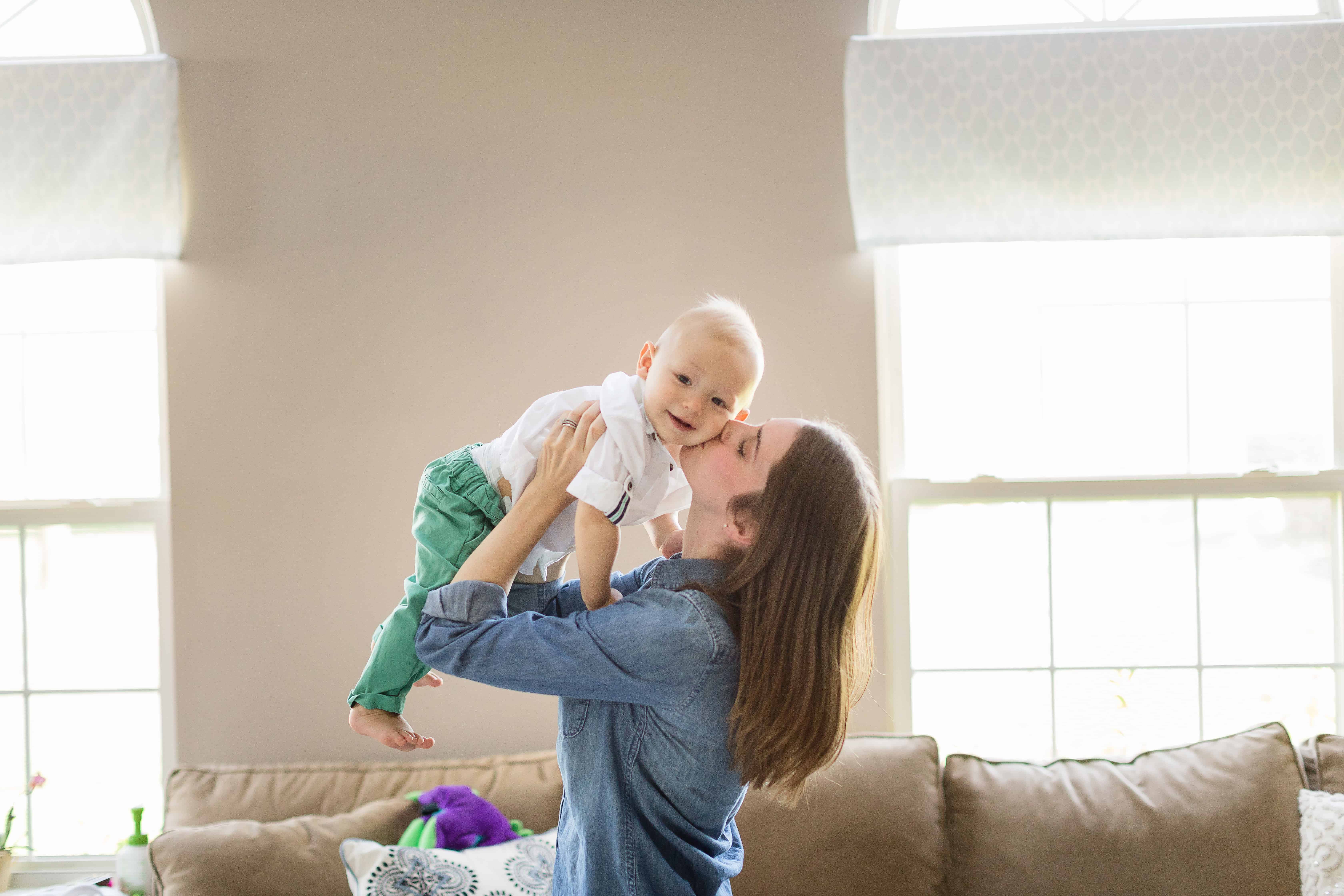 photo by Alexandra Whitney
What did I do to help?
1. To preempt potential PPD, I did placenta encapsulation. A doula came and picked up my placenta after delivery (my doctors were told ahead of time to save it and put it on ice) and turned it into pills. It sounds gross but it was a game changer and I will absolutely do it again. Seriously, I felt a HUGE difference being on them – I noticed because I started with 1 a day and eventually took 3 per day and it just made life easier.
What are the benefits?
it helps to balance your hormones restores iron levels in your bloodincreases milk production reduces postpartum depressionincreases oxytocin levels which helps your uterus return to its normal size
2. As I mentioned above, I increased my medication. I was on a super low dose during pregnancy and with everything that was going on after Parker was born, we decided to increase and it has made a world of a difference. I was nervous because I’m breastfeeding, but after talking with my therapist, pediatricians and Jordana, we decided it was best for all parties involved (and I’m still not on a super high dose).
3. I set up sessions with my life coach and my therapist. Talking things out and having people ask questions and dig deep – while painful at the time – was really helpful and ultimately, healing. I so encourage you to reach out to someone to just release.
4. I cried. I let myself release without judgment. I usually felt better within 5-10 minutes.
5. I asked for help. My mom (bless her soul) stayed with us the first week. She would bring me breakfast in bed in the morning while I was nursing P so Jordana could sleep. My dad would also come over almost every day and still to this day, we see my parents at least 4 times a week (I wish they would just move in already haha). We would ask our friends to pick up groceries, baby supplies, depends (hahahaha yup – these were the BEST after delivery).
How did you cope after delivery? sending hugs + love.