So we left off with lots of needles (if you missed part 1, check it out here) … Both Jordana and I were preparing our bodies for our reciprocal IVF cycle. Jordana was going through an egg retrieval and I was preparing my body to carry our baby.
The day finally came for our egg retrieval. It’s a very short surgical procedure where they go into each and every follicle and take out the eggs and it went really well! Now the wait … we had to wait for the call each day to tell us how many embryos fertilized, were still thriving and then how many actually made it to day 5 (transfer day). Basically, they typically monitor them over a five day period to make sure they continue to grow and expand. Out BIG day arrived and we had a beautiful, perfect embryo ready to transfer (others are now frozen in time – side note: how crazy that if we ever use another one of these embryos in the future, they were technically made in 2016 … #mindblown)! It was hilarious – we walked into the room and the doctor said to us, "so, do you want 1 or 2?" It was like we were at a diner ordering eggs LOL We chose to transfer one embryo so that the risk of multiples was super low. 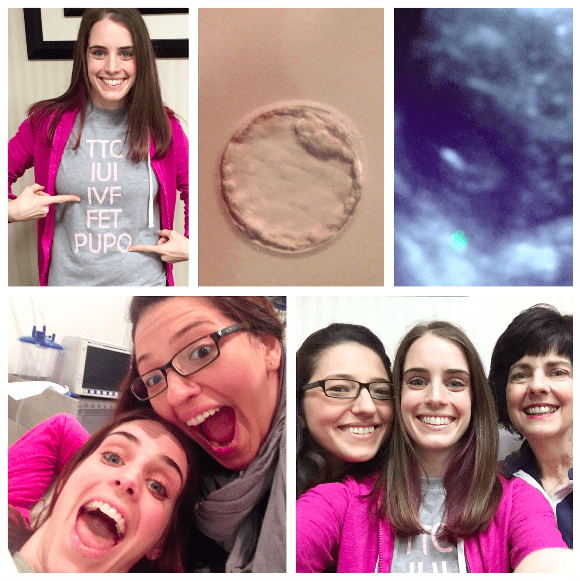 The procedure only took about 5 minutes and then we were officially PUPO (pregnant until proven otherwise – there are tons of acronyms in fertility land)! And then the dreaded Two Week Wait (TWW in fertility terms). They call it the TWW because typically you have to wait about two weeks to know whether or not you’re officially pregnant. The days start counting from the date of the egg retrieval because that was the day the eggs were fertilized. So when they did the embryo transfer, the embryo was already 5 days old (so crazy that our baby was growing outside of the womb!). 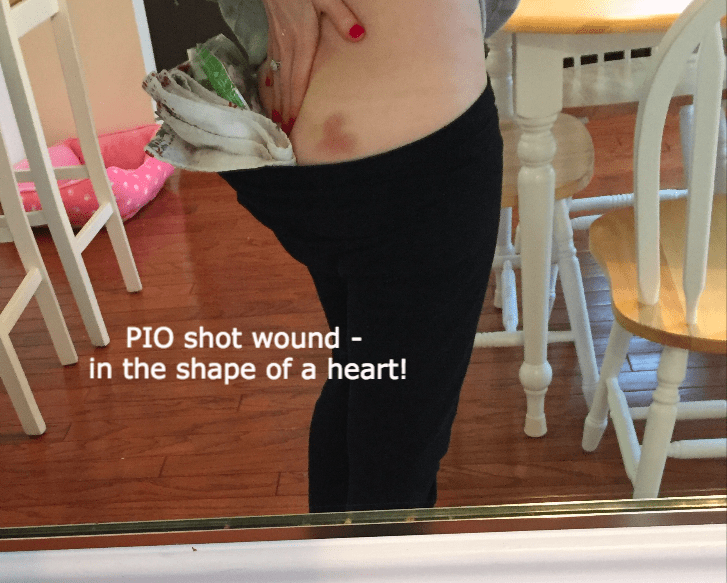 I had to continue all of my meds and shots. Every single night, we had to do the PIO shot in my butt – it was quite a process. The needle was actually quite thick and
I was TERRIFIED the first night. We’re not medical professionals and we had to do this ourselves? I’m not scared of needles, but

this was a different story … so I called my cousin who is a nurse and she came and helped out the first two nights – thank goodness she lives close by! So each night I would put an ice pack on my butt while we were heating up the needle. Then you do the shot and massage the area while heating it for 10 – 15 minutes, otherwise you get an egg because the oil doesn’t spread out. I had some nice bruises on my back side for a few weeks! (I got to stop the shots & meds when I was 10 weeks pregnant)

Three days after the transfer, I noticed my sense of smell was super intense – my shampoo was like a flower explosion. I was also feeling really tired and my boobs felt sore. I took these as good signs! Five days after the transfer was Mother’s Day (2016) and I thought it would be sooooo amazing if I got a positive pregnancy test even though I knew it was really early to tell. The test was negative but I wasn’t too upset. I tested again the next day … negative. I was feeling nervous at this point but again knew it was early. The next morning I took a test and thought it was negative and I was feeling really down. Jordana went into the bathroom and looked at the stick and was like ummmm Gena, there looks like there’s a line there! So I busted out the digital test and tried not to stare at it and then witnessed the most beautiful word I have ever seen in my life — PREGNANT. I screamed and ran down the stairs crying and jumped into Jordana’s arms. I couldn’t believe it. 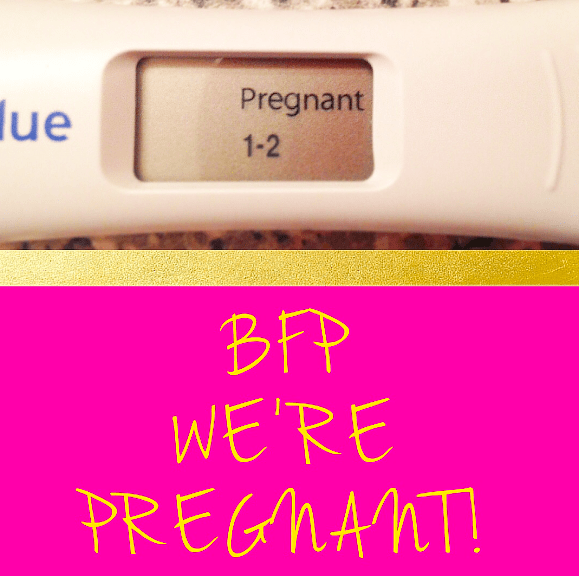 Two days later, we went to our fertility clinic for our blood test (called a beta test) and the numbers were looking great – we were officially pregnant. You then go in every other day to make sure your numbers are doubling and they were. We scheduled our first ultrasound to make sure the embryo was implanted in the right spot … and it was! The next ultrasound was over a week later and it was when we would hear the heartbeat!! I was so nervous. The first trimester is such a fragile time but it’s impossible to not get excited. At that next appointment, the most magical sound ever was heard in our room … our little baby’s heartbeat. I couldn’t stop listening to it (we totally recorded it on our phone!). Our little one was so cuuuuuuute – like a little gummybear.
Before we got pregnant or even started the process of having a baby, Jordana & I had a sense we were going to have a boy. We didn’t know why but we just had a feeling. At the appointment and each after that, the heartbeat was really fast, so I was convinced it was a girl. Since we were with a fertility clinic, we got to go see our baby every week through 9 weeks and then we were transferred to our OB – we were so spoiled. At the OB, you only got ultrasounds every 4 weeks – so I, being the crazy person I am, bought a doppler at home so I could hear the heartbeat (best purchase ever).
At 12 weeks, the OB does a test to see if your baby is at risk for a few chromosomal issues. Jordana & I opted to do an extensive test where you could find out those potential issues as well as the sex of the baby (I’m so impatient!). Thank God our baby looked healthy aaaaaaaand we found out …. IT’S A BOY! 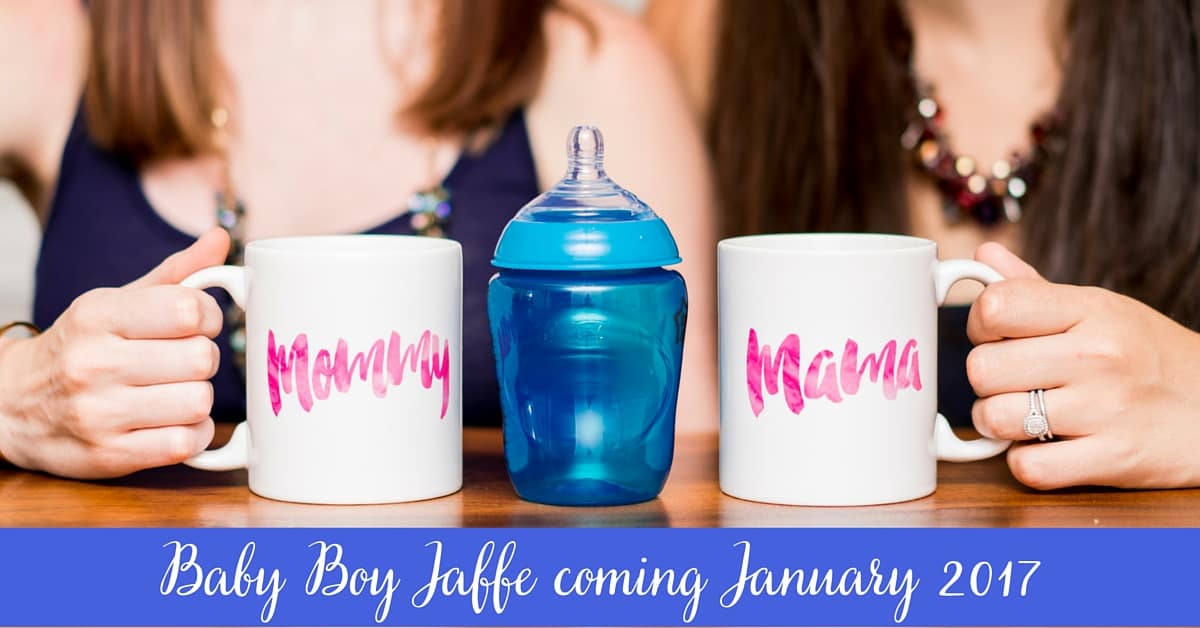 Our little embryo that we transferred on May 3, 2016 was our little Parker Pie. When we got the call that our baby was a boy, we were in shock. Jordana literally was frozen for a few minutes. What do we do with a boy?! Jordana is one of three girls and her sister has three girls. I have a half-sister who also has three girls. And we’re two girls! After the initial shock wore off, we were thrilled! And then the boy fun began!
That whole day we talked names. I had a whole list that I kept on my phone. It was so fun. I so vividly remember this day – we were visiting Jordana’s dad + stepmom in the Hamptons and were in the pool – it was such a beautiful, sunny day and my bump was showing a little — I’ll cherish it forever. Parker Bryant was obviously on the list as we had came up with that the year before (for those of you who don’t know the meaning behind his name – Jordana & I met on the F Train in NYC after getting on the subway at Bryant Park, so it’s very symbolic for us). The sentiment of the name won out and we were obsessed with the fact that his initials would be PBJ!
I feel so incredibly blessed that it only took 1 try to get pregnant. From being a part of this fertility community, I know so many women who had to go through multiple rounds of egg retrievals and transfers, and some still don’t have their miracle baby. Getting pregnant is typically an emotional experience with lots of ups and downs (and lots of hormones!) and our journey definitely didn’t go as I thought / planned. But I’ve learned that you can’t have expectations when it comes to babies – planning for them, while they’re in your belly and when they’re out! It’s a huge lesson in patience (I have very little!) and trusting the Universe and it’s divine timing. And looking back, if things had gone differently, we wouldn’t have our little Parker! He was the baby that was meant for us and he truly is absolutely perfect.
This picture is of Parker 5 days in and then 5 days out 🙂 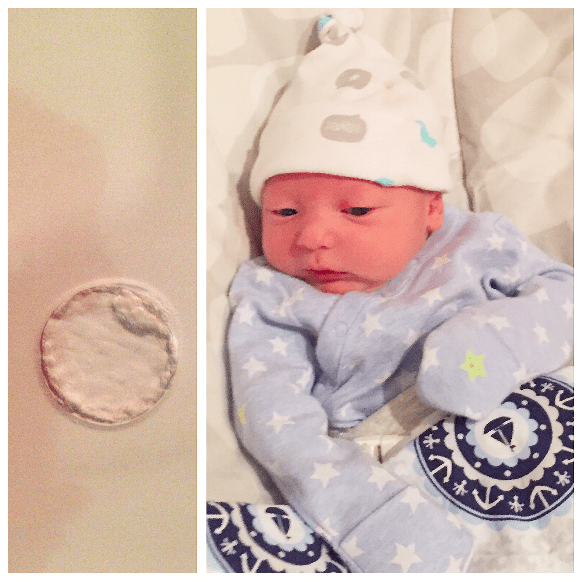