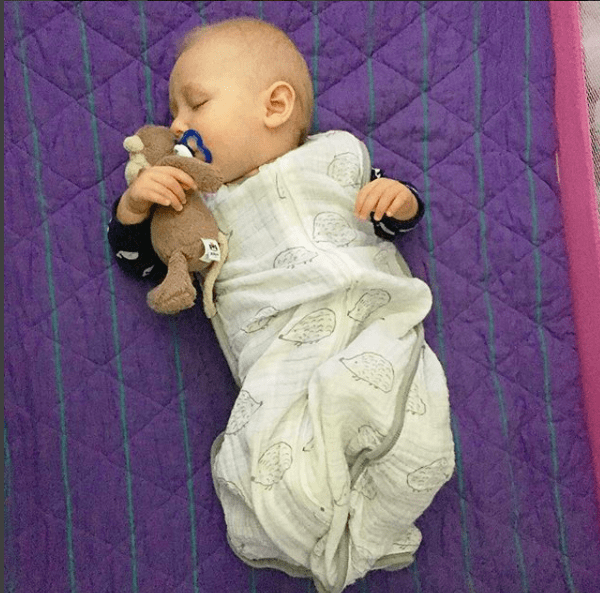 Within a week of us doing this, he slept 12 straight hours. It’s been another full week since we started and he slept 10 – 12 straight hours 4 nights in a row and then we went on vacation and it messed it up a little bit for the first 2 nights but then he slept 11 straight hours the third night. When we put him down now for naps + bed, he rarely fusses – he will sometimes just hang out and play with his paci + monkey for 15 – 30 minutes and puts himself to sleep. He’ll roll around and make playful noises – it’s really beautiful to witness his independence + growth in his ability to entertain himself.
It’s also made me realize that my therapist was right. I was going in for me. I was projecting my emotions onto him. Yes, he’s upset and maybe even sad, but he’s okay. He is so unbelievably loved + cared for and we are always there when he wakes up, so he knows that he is + never will be abandoned. And guess what? When he wakes up, he is SO happy. Even if he goes to sleep after crying for 20 minutes, he’ll wake up in the morning with a huge smile. I was so worried that by him falling asleep after crying, he would remember in the morning. But he doesn’t. The smile is what allows me to keep going — he’s happy because he’s rested. I’m happy because I’m rested.
It’s still a struggle to hear him cry, but I know that he is safe and that he will eventually fall asleep. It’s definitely getting easier because he is getting much better. It’s a learning curve for all of us but I am so proud of him for being so adaptable and proud of me + J for being brave enough to handle the discomfort of his cries because we know it’s in his best interest.
TIPS FOR SLEEP TRAINING:
Have a discussion with your partner to see what you both can handle. I couldn’t handle as much as Jordana, so it was up to me to decide what method we were going to use.
Consistency is KEY. You have to pick a method and stick to it for at least 2 weeks. Babes love routine + structure. And make sure you’re doing the same nightly routine – babies notice sleep triggers, so when we put the sleep sack on Parker, he knows that he’s getting ready to go to sleep. If after 2 weeks, it’s not working, you need to try another method.
Notice your baby’s cues – when they’re sleepy, do they rub their eyes, do their eyebrows get red, do they yawn? Once you figure this out, you need to make sure you start your little sleep routine right away – you don’t want to miss the sleep window!
Stay home. During the two weeks you start the training, literally stay home. Don’t make plans so if you suddenly see your baby yawn, you can put him / her to bed immediately. We didn’t go anywhere at all (we work from home so we were lucky to be able to do this, especially for naps) and kept a log of when he slept.
Turn the sound off the monitor. I’m sure you can hear your babe sleeping from another room + even if you can’t, most monitors have those color indicating levels that will tell you how high + loud your baby is crying.
Don’t stare at the monitor. You totally should check, but don’t stare at it because it’s hard to see your baby’s face when they’re crying. Set a timer and look every few minutes if you need to. Trust me, 5 minutes seems more like 50 when you’re sleep training, so no need to make it harder.
Write down a few mantras to repeat to yourself when it’s happening. For example, he is safe, he knows I love him, I am strong, it will get easier. You want to remember WHY you are doing this. Sleep is essential for a happy, healthy baby (and adult!).
Have a support system. I had a few friends who have kids that knew we were sleep training and I would text them as it was happening and they would remind me that everything was okay and that I was a good mom.
Again, all babies are different and this method may not work for your baby or even our next baby, but hopefully some of these tips + tricks will help!
here’s to a great night sleep + a happy, well-rested baby.
xo
*I am an affiliate for the links above – we used both the bassinet + the book for Parker. If you purchase either through my link, I may receive compensation.